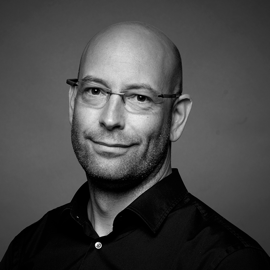 Philippe is a born creative. But he didn’t know it. It was only when he found himself drawing from sheer boredom during his studies at the Lausanne Faculty of business and economy that an old art teacher’s advice spurred him to join his first advertising agency in 1992. Thus, starting his stellar career in international communications and creative design.

He moved to Zurich for three years, working at FCB as an Art Director for Chrysler Jeep Pan European. He was then recruited by Dentsu Europe Brussels to manage global FMCG brands and continued with Saatchi & Saatchi Geneva for over 8 years as creative director.

During this time and effectively for the past 26 years, Philippe has generated a countless number of ideas which have won over 40 national and international advertising awards.

A genius thinker, Philippe is 100% Swiss, and also a fan of mushroom picking, cooking and spending time with his family. He is Squids’ creative backbone, since he co-founded the company in 2011 with Kerry.