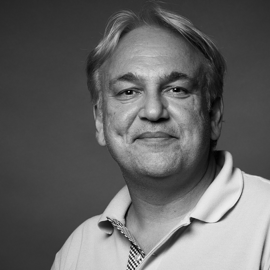 With nearly 30 years’ experience under his belt, Vick is a design veteran.

A graduate from the Art Centre College of Design (Europe), he first started his career at McCann in Geneva and rapidly became Art Director in charge of McDonald’s Switzerland. He then moved around their Zurich and Milan offices for special appointments.

As the internet wave kicked-in, Vick seized the opportunity to start his own business, creating some of the first websites around.

It was finally when he won the pitch for Givaudan’s annual report in 1999, which he then produced for the next 18 years, that he launched into his new career in Editorial and Annual Reports design.

His extensive experience with hundreds of magazines, brochures and Annual Reports is now in Squids’ hands!